“Think my arm’s going to be swollen. Have to remind myself it’s not a dream.”

Cynthia Erivo has had a fair few ‘pinch me’ moments in her career. She’s already won a Tony and Grammy Award with her work in musical theatre. Now, she’s been nominated for BAFTA’s EE Rising Star Award. The trophy is described as honouring acting talent who have “demonstrated exceptional talent and ambition and begun to capture the imagination of the British public”. 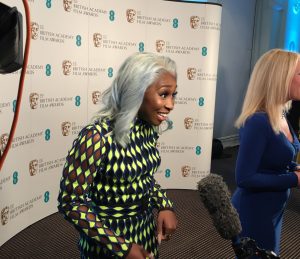 2018 saw Erivo star in Drew Goddard’s Bad Times at the El Royale and Steve McQueen’s Widows. Covering the nomination ceremony of the Rising Star award for Entertainment News, Cynthia told me about the transfer from stage to screen.

“There’s something that you get from live performance that prepares you for film. If things go wrong you figure it out on the spot. In film, you get a chance, you’ll do it again if it goes wrong. If not, it’s ok because you’re used to that. I learnt patience. Sometimes things take a long time. You could be there for a whole day doing a scene and not being annoyed if I do something wrong. Repetition means you get a chance to do something again, something new.

Cynthia will go up against Jessie Buckley, Barry Keoghan, Letitia Wright and Lakeith Stanfield for the award.