The Addams Family – Behind the scenes…

Home Uncategorised The Addams Family – Behind the scenes…

The Addams Family – Behind the scenes…

Front row seats at the theatre are an amazing way to feel totally immersed in the production taking place just inches from your nose. However, that experience was trumped for me when I was invited to take a slightly broken, wooden, cushion-less yet still very much front row seat to watch the cast of The Addams Family in rehearsals before they head off on a UK tour. 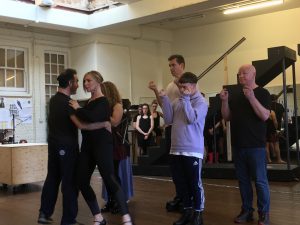 It’s a show which a British audience is yet to enjoy and that is something that Les Dennis, who will play the role of Uncle Fester, is very excited about.  “Although this has been on Broadway, it’s the first time in the UK so none of us are taking over from other actors, who have put their stamp on it. We’re all being given the chance to create, which for an actor is the best thing. To eventually get the chance to play Fester – I just jumped at the idea of it.”

Despite the musical of The Addams Family not gracing British stages until this year, audiences will, of course, be familiar with the characters due to both the TV series’ and feature films. West End favourite Carrie Hope Fletcher stars as Wednesday Addams, who has grown up from the young girl we are familiar with and Carrie told me all about the scary way in which Wednesday has developed. “There’s another boy in her life and she’s feeling things she’s never felt before. She’s an eighteen year old girl so hormones are flying around anyway and a normal girl in love would be dangerous, but Wednesday in love when she’d got a crossbow in her hands – you need to give her a wide berth.” 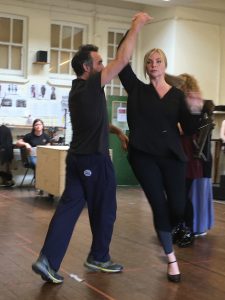 Other iconic characters to grace the stage are Lurch, played by Dickon Gough, and Pugsley Addams, played by Grant McIntyre who said, “It’s funny actually because my parents will probably joke and say that I was similar to Pugsley Addams as a child, so it’s pretty typecast.”  However, the head of the family and the lady leading the cast is Samantha Womack in the role of Morticia Addams. “Everyone has an idea of what they want Morticia to be. A certain voice. A certain type of elegance. Elegance for me was key. I didn’t want her to be overtly sexy. There have been some interpretations where she’s over sexualised and I don’t think that’s right. I think her sexuality comes from when tangoing when she’s dancing with her husband.”

Even in the rehearsal room, the elegance Samantha speaks of shines. For an intimate audience of journalists and photographers, she dazzles throughout the high energy opening number of When You’re an Addams. The charm of Cameron Blakely in the role of Gomez is evident, as well as the star quality of Les Dennis’ Fester. Speaking of the incredible buzz that the opening of the show creates, Dennis, who has gone bald for the role, said, “That’s the beginning and it just rises and rises! It’s a show that every note musically and the truth of the story is there and it never feels like it drags. It’s a fantastic show and brilliant to be part of.” 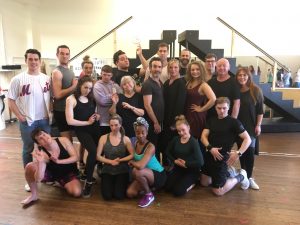 Audiences are set to be taken on a journey with one of the world’s most famous families and although laughs are guaranteed, Samantha Womack promises that there is far more to the show than it’s comedy value, describing some of the music as “poignant and soul destroying about a father that loses his daughter and a marriage that is threatened and this whole family that everyone perceives as strange but they see themselves as normal. What is normal? What does it all mean? It’s really, really beautiful – a stunning piece of work.”

The Addams Family begins its UK tour in Edinburgh on April 20th.